From the liner notes: 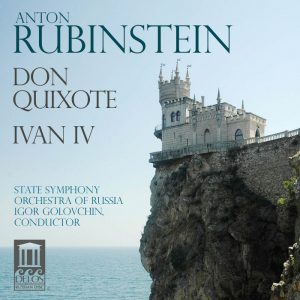 As early as the mid-1860s Rubinstein developed a fascination for the legendary figure of Tsar Ivan IV (“the Terrible”) and his era. In 1866, the composer began working on a new opera, The Oprichniki (the “oprichina” was Russia’s first repressive institution, set up under Ivan IV for the express purpose of brutalizing and controlling the nobility), based on the libretto written for him by P. Kalashnikov. Having finished the overture and the initial chorus, Rubinstein, not quite satisfied with the libretto, turned to V. Sollogub and asked his opinion about the libretto and his potential suggestions for altering it. Sollogub rejected the libretto categorically, pointing out its dramatic and literary drawbacks and, among others, the erroneous characteristics it attributed to Ivan IV: “The way he is depicted, he appears to be no more than a hangman, lacking the slightest trace of the legendary grandeur he should be credited with, even amid the awful horror he was responsible for.” Based on that opinion, Rubinstein ceased his work on the opera. Yet the personality of this first Russian Tsar – severe, overpowering, energetic, cruel, and recklessly persistent in achieving a goal he set for himself – continued to hold the composer’s interest. In 1869 he renewed work on the project, producing a musical character piece based on his own material from his incomplete Oprichniki.

Unlike Don Quixote, this composition has no discernible program. This was by intentional design, since Ivan IV is a psychological portrait rather than a chain of events portrayed in music. In this multi-faceted portrait of Ivan, Rubinstein’s music employs a wide range of troubled, dramatically intense and tragic colors, moods and effects. In the introductory theme, he is depicted as being stern and adamant, though still very human, with an air of grief-stricken thoughtfulness. In the lyrical fugato section, he comes across as troubled, even as he demonstrates his power and energy; in the beginning of the Allegro non troppo section, his generous and altruistic side comes through. In the broad, Russian-sounding secondary theme, the full glamor and grandeur of his tsar’s status is heard in an adaptation of the classic Russian choral theme of glorified praise (presented by the “church choir” of four cellos with double bass). This comes even as Ivan wears the humble garb of a monk and the “people” cry out in despair, recounting his terrifying atrocities (chromatic passages of thirds against a repeating F in the strinqs). The heterogeneous character of this music is, upon closer analysis, harmonically and structurally interrelated. For example, the alarming motifs of the Allegro emerge from the lyrical theme of the fugato; the people’s cry of despair is developed out of the chromatic voices that accompany the elaboration of the “praise” theme.

Rubinstein treats the characteristic thematic material of his symphonic picture with great artistic freedom and skill, presenting it in various modes and tonalities, as well as both diatonic and chromatic contexts. In bringing the themes together, revealing them simultaneously, then varying them while extracting separate motives for further development, Rubinstein achieves a tremendous sense of dramatic strength and integrity. The music of this composition, unlike many of Rubinstein’s other works, is thematically all-pervasive. The nature of the thematic material was the decisive factor in determining the free form of this picture (though it still incorporates certain features of the sonata allegro form). Perhaps one of the reasons this composition stopped filling concert halls is its rather bleak orchestration. Ivan IV was heard for the first time on November 14, 1869 with Balakirev conducting. Rubinstein was not present at the concert, being out of town at the time. But it was again performed in St. Petersburg under his baton the following month. The piece stimulated great interest among Rubinstein’s contemporaries. For example, Borodin wrote that “to my surprise, the music is good; you simply can’t recognize it is Rubinstein. Nothing Mendelssohnian; nothing like what he wrote before.” Others maintained that it was the best composition Rubinstein had written thus far; and that it marked a new and much more interesting period in his creative development.