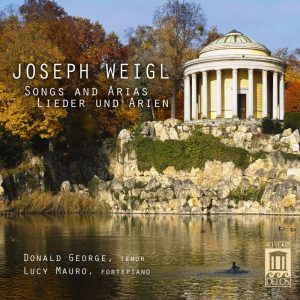 Joseph Weigl was born on March 28, 1766 in Eisenstadt, just south of Vienna. His father served as principal cellist in the Esterházy court orchestra and his mother served as a choral and chamber singer. The great Franz Josef Haydn, long-time Kapellmeister of the Esterházy family, was his godfather; recognizing his precocious talent, he encouraged the boy’s training and development from an early age. Weigl moved with his family to Vienna in 1769 where he began music lessons and attended school. His first major teacher was Johann Georg Albrechtsberger (also Beethoven’s teacher), under whose tutelage Weigl wrote his first opera, Die unnütze Vorsicht (The Needless Precaution) at the age of 16. In 1785, at the age of 20, he began composition lessons with Antonio Salieri, and started working with the Vienna court Theater, accompanying vocalists. His valued work in preparing Mozart’s Nozze de Figaro and Don Giovanni for performance led, in 1790, to his appointment as the deputy Kapellmeister of the Vienna Court Theater. Weigl composed Italian and German operas; most of them were highly successful, especially his best-known work, Die Schweizer Familie (The Swiss Family). He married Elisabeth Bertier in 1805; they had three children. After 1823, Weigl focused more on writing sacred music and became vice-Kapellmeister of the Imperial Court in 1827. He died on February 3, 1846 and was buried in Vienna’s Zentralfriedhof cemetery, not far from the graves of Beethoven and Schubert.

Weigl composed in two distinct styles. The prevailing Italian influence informed his earliest operas: lighter works of fresh and charming bel canto style, such as his operas Principessa d’Amalfi (the Princess of Amalfi) and L’amor marinaro (The Sailor’s Love). But he soon began to write German-language operas that were more in keeping with the evolution of musical Romanticism in Germany. His work in the “Singspiel” form (lighter, popularly-oriented opera with spoken dialogue) was particularly influential. Two early examples are Das Waisenhaus (The Orphanage – 1808) and Der Bergsturz von Goldau (The Avalanche at Goldau – 1812). His Die Schweizer Familie is seen by many historians as an important milestone in the development of German Romantic opera. This same opera may also have had a direct impact on Franz Schubert, who saw it performed many times. Its use of the clarinet as a pastoral “shepherd‘s instrument” could well have inspired Schubert’s famous Lied with clarinet, Der Hirt auf dem Felsen (The Shepherd on the Rock) – which was written for the same diva who premiered the soprano’s role in Die Schweizer Familie. Schubert also attempted (unsuccessfully) to write Singspiele in Weigl’s style.

We should remember that, all the while, Weigl continued to flourish as a composer of Italian opera. He remained in considerable demand (and spent considerable time) at Milan’s legendary La Scala Theatre until fairly late in his career, composing quite a few works for the house. Such was his public popularity and esteem among the Milanese musical establishment that he was ranked alongside locally favored composers Gioachino Rossini, Johann Simon Mayr and Ferdinando Paer. He was even offered the directorship of the newly founded Milan Conservatory in 1808; even though he turned the position down, he was made an honorary member of the Conservatory, along with Mayr, Paer, and Luigi Cherubini. One may well imagine the considerable differences between Weigl’s Italian and German styles from the reception that his Die Schweizer Familie got when it was presented in Italian translation at La Scala in 1816: the Italian audience’s derisive (and notoriously noisy) reaction caused it to be withdrawn after a single performance!

Many may wonder why Weigl – who was a highly popular contemporary of Haydn, Mozart, and Beethoven – was forgotten, while the other three have become widely known names in the musical world. The study of Weigl’s works seems to reveal two related reasons why Weigl’s music fell into neglect. First, he knew what his audience liked and expected; or – as Beethoven reportedly said, “Alles bei ihm ist empirisch aus Erfahrung” (Everything about him is empirical from experience). In other words, he purposefully wrote “practical” music that was immediately appealing to the public, catering to the ephemeral fads and fashions of the day – with not much concern for posterity. German Romantic pioneer Carl Maria von Weber may have touched on an associated factor when – in an 1817 review of Das Waisenhaus – he wrote, essentially, that Weigl indeed achieved well-rounded melodic and scenic effect in his music – but that his talent did not extend to serious dramatic music. Thus, while his tuneful writing made him immensely popular in his day, his lack of novelty and the scarcity of highly successful dramatic works from him may well have kept the public from thinking of him as a “serious” composer.

Now, nearly 250 years after Weigl’s birth, we are rediscovering in his music a frequently overlooked aspect of the Classical era, namely its more “popular” music. And we are beginning to realize that – while he may never have earned a permanent niche in the pantheon of great composers – Joseph Weigl’s music was indeed a significant cultural force of its time; one that served to influence generations of composers to come.