Conductor Benjamin Makino Talks About Home Is A Harbor 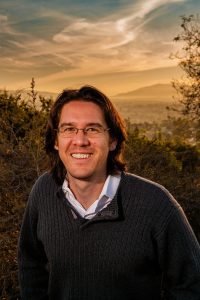 Opera Memphis conductor Benjamin Makino spent the past summer recording Mark Abel’s opera Home Is A Harbor and relates his experience in a blog he titles “How I Spent My Summer Vacation”:

For now, please allow me to describe two projects which largely defined this summer the first of which being recording Home is a Harbor.

I was approached in late winter by soprano Jamie Chamberlin about a project in which she was involved with composer Mark Abel. Jamie and I had attended UCLA together, and she was about to appear in Long Beach Opera’s production of Marilyn Forever, but we hadn’t spoken much since our last project together in 2010. She and soprano Ariel Pisturino had recorded an art-song album with Mark the previous summer and were going to be recording a new opera over the summer that he was just finishing. I had met Mark previously at a performance I gave of Das Marienleben in Orange County but had never worked with him before. She asked if she could put us in contact, as there was no conductor yet involved in the project. Looking forward to the opportunity to work with them both again, of course I replied “yes.”

Mark and I spoke briefly over the phone about the project–a short three-act opera titled Home is a Harbor. He wrote the libretto himself which follows the lives of two sisters from Morro Bay coming of age in the mid to late 2000’s. The project sounded interesting in itself, although it was Mark’s personal story and the chance to work with some long-time colleagues and friends that fully convinced me that I wanted to take on the project. I received the scores around March, and Mark flew out to go over the score in the first week in June to review the piece. 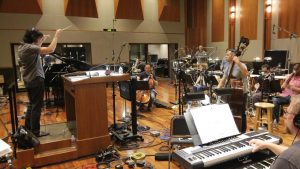 Ben Makino conducting during “Home Is A Harbor” recording sessions

Mark is a unique personality in the already highly diverse group of composers I have been fortunate enough to meet. Early in his musical career he was a rock guitarist and producer in New York. Frustration with the popular music scene at the time resulted in a hiatus of about twenty years (I don’t know the specific amount) during which he worked as a journalist at the San Francisco Chronicle. Mark finally left journalism completely in the 2000’s, dedicating himself to composition, writing through the medium of MIDI technology, which allows him to work out complex musical ideas in real time. A musical autodidact, Mark’s knowledge of the repertoire is vast, encompassing nearly every corner of the repertoire. On his visit in June we spent some very enjoyable breaks from his piece talking about favorite works of his, among them the violin concerti of Karol Szymanowski which I am listening to as I write this entry.

Home Is A Harbor: An Opera in Three Acts

The Palm Trees Are Restless: Five Poems of Kate Gale

Home Is A Harbor: An Opera in Three Acts

The Palm Trees Are Restless: Five Poems of Kate Gale

“Abel is as good a poet as he is a musician. … anyone who is interested in modern vocal music will want to own this disc.” —Maria Nockin, Fanfare Magazine

Such words could also describe this stunning new release: Home is a Harbor, Mark’s first opera. And a wondrous bonus in this two-disc set is his latest song cycle, The Palm Trees are Restless. Both works are prime examples of Abel’s hard-hitting signature style that couches often biting social commentary in a unique musical fusion that combines the depth and sophistication of classical music with the in-your-face impact of rock.

Many of the wonderful singers who graced his previous releases are also members of Home Is a Harbor’s marvelous cast. Palm Trees gets a superlative performance from GRAMMY®-winning soprano Hila Plitmann, known for her work with top contemporary composers, including her husband, Eric Whitacre.

Since a veteran of the Afghanistan war is a key character in the opera’s story, Delos will donate a portion of album sales revenue to Veterans’ organizations, beginning with Cathay Post No. 384 of the American Legion.