Another “Delos Takeover” At The Met 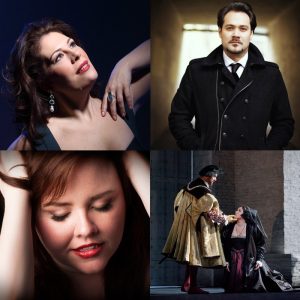 We at Delos are thrilled to announce the appearance of two of our veteran opera artists (and another soon-to-be Delos star) in this season’s Metropolitan Opera production of Anna Bolena – the first of Gaetano Donizetti’s “Three Queens” trilogy; opening night is this Saturday (September 26).

Those of you who follow our Delos Insider blog may well remember the last such “takeover” (just kidding!) by Delos artists in major roles at the Metropolitan Opera: I reported on that one last April, after I personally (and joyfully) attended performances of Un Ballo in Maschera and Cavalleria Rusticana/Pagliacci on successive evenings. Between the three operas, I got to revel in fabulous performances by Delos artists Dmitri Horostovsky and Sondra Radvanovsky (Ballo) and Marcelo Alvarez (Cav/Pag).

And, as if that weren’t enough glory for Delos, rapidly rising mezzo-soprano standout Jamie Barton (winner of the 2015 Richard Tucker Award) will portray King Henry’s paramour, Lady Jane Seymour – who ultimately costs Anne (Henry’s second wife) her head! Jamie — one of our most exciting new Delos Artists — has recently made a wonderful new recording of luscious songs by Sibelius, Dvořák and Mahler, with the brilliant Brian Zeger at the keyboard. Scheduled for release in 2016, it will add to Delos’s exceptional array of fabulous recordings by many of today’s most revered opera stars. Check out our previous posts concerning this amazing singer.

This promises to be a particularly spectacular and memorable season for Sondra: in its course, she will take on the daunting challenge of portraying all three of Donizetti’s Tudor queens at the Met: an extraordinary accomplishment that’s never been duplicated on a New York stage since Beverly Sills did it over fifty years ago. She will appear in Maria Stuarda beginning next January, and in Roberto Devereux (as Queen Elizabeth I) in March.

To celebrate this remarkable new Delos “takeover” have a listen through our Delos at the Met Playlist on Spotify: