We are starting a new series for The Delos Insider that will be featuring individual instruments that we have recorded over the years on Delos. We will focus on the instruments as well as some of the masters of those instruments. We are starting this series with what has been called “The King of Instruments” — the pipe organ.

Please take a moment and enjoy this wonderful trailer that captures the spirit of “The King of Instruments”:

Master recording engineer John Eargle, for many years the Delos Director of Recording, was himself an organist. John not only wrote the “bibles” on microphones and sound recording, but also created the Delos “King of Instruments” series. Here are some comments from John about recording this noble instrument:

“The organ has traditionally posed special problems for the recording engineer. Not too many years ago, its extremes of dynamic range and frequency response taxed the very recording medium, but digital has solved much of that. What remains however are the limits of two-channel stereo in recreating the auditory perspectives of the large liturgical spaces in which the instrument has evolved.

“As listeners at an organ concert, we are aware of sound impinging on our ears from all directions, more so than at an orchestral concert. The direct sound from the instrument may be perceived as coming from the front, or from the back of the listener in the case of rear gallery installations, while reverberant sound is perceived as coming from all directions. There is no way we can duplicate this complex sound field in the home, but somehow an impression must be created which conveys the emotional dimension of the original.

“But the engineer must first do justice to the music, and this means that the proportion of direct to reverberant sound must be carefully gauged to preserve details of articulation and phrasing. If the microphones are too close, the sound from the instrument may not be sufficiently blended. If the microphones are too far from the instrument, then too much musical detail may be lost.” 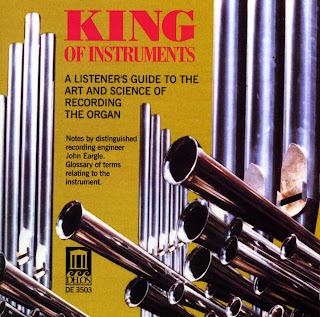 In 1988, Delos released an organ compilation called “King of Instruments” in which John Eargle takes us on a tour of some of the more interesting organs in the United States and takes on the unique challenges of recording the organ. These included the Rieger Organ in the Church of Pacific Union College, Angwin, California, the three-manual Rosales Organ in Trinity Episcopal Church, Portland, Oregon, the four-manual in San Francisco’s First Unitarian Church, the four-manual Rieger Organ in the Bryn Mawr, Pennsylvania, The Portland Rosales Organ, the Schudi Organ in the Church of St. Thomas Aquinas in Dallas, Texas, the Pilzecker Organ in St. Jude’s Church, Detroit, Michigan, the Aeolian-Skinner Organ in St. John’s Chapel at the Groton School in Groton, Massachusetts, the famed Marcussen organ at Wichita State University in Wichita, Kansas, and the Casavant Freres organ in the Cathedral of St. Peter in Erie, Pennsylvania.

We have produced many great organ recordings since 1988, so here we are featuring one of our “Masters of the Instrument” — Cherry Rhodes.

Cherry Rhodes has released two albums with Delos; Cherry Rhodes in Concert at the Cathedral of Our Lady of the Angels, and our most recent release Cherry Rhodes at the Kimmel Center! 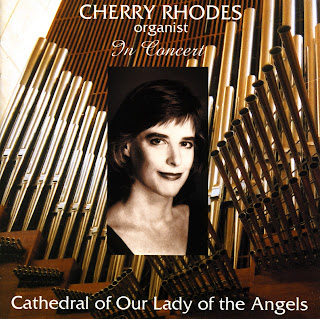 Cherry Rhodes’ debut Delos release Cherry Rhodes in Concert, was recorded live at the Cathedral of Our Lady of the Angels, Los Angeles, on the feast day of St. Cecilia — Patron Saint of Music — and offers a unique opportunity to hear and enjoy this special recital. Cherry Rhodes is the first American to win an international organ competition (Munich) and has played recitals at Notre Dame, Bologna, Nurnberg and Vienna.

She made her debut with the Philadelphia Orchestra at age seventeen and subsequently performed with them many times under the baton of Eugene Ormandy. Ms. Rhodes performed for the opening of the Kennedy Center.

In October 2005, Cherry Rhodes was one of the featured soloists at the Virgil Fox Legacy 25th Anniversary Memorial Events in New York City, a three-day festival commemorating his achievements, and later gave a stellar recital at the Festival International d’Orgue Bridel in Luxembourg.

This varied and unusual repertoire highlights Ms. Rhodes’ power as a performer and her breathtaking talent as an interpreter of both historic and contemporary compositions. This release is perfect for any season. It combines the sacred with the current, and features Larry King’s stunning piece which has brought many to tears who listen to it. It was written for Cherry Rhodes and dedicated to her. 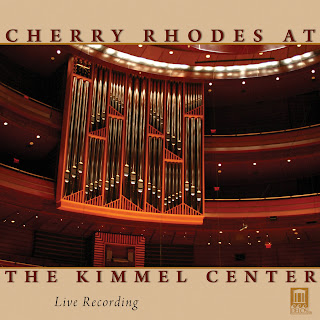 Cherry Rhodes at the Kimmel Center features a festive recital during the inaugural year of this splendid new instrument in Philadelphia’s Kimmel Center. Her program is beautifully planned to introduce the instrument and its wide range of colors. The recorded sound is clear, warm and dimensional.

It is no wonder that this remarkable American artist has been asked to do the inaugural performances on many important instruments and in many major settings. Her biography reads like a concert organist’s fantasy — or wildest dream — of accomplishments and accolades. From a young age, she has been performing all over the world with legendary
conductors, in fabled cathedrals and in the most prestigious concert halls. She also conducts master classes, and mentors gifted young organists who themselves are winning prizes in national and international competitions. She is currently Professor of Organ at the Thornton School of Music, University of Southern California. 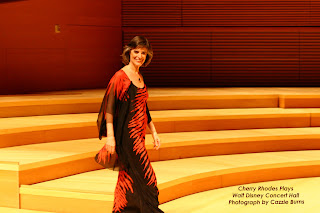 Cherry Rhodes is the first American to win an international organ competition. This honor, awarded in Munich, was followed by another top international prize in Bologna. She has played recitals at the Cathedral of Notre Dame in Paris and at international organ festivals in Bratislava and Presov (Czechoslovakia), Freiburg, Munich, Nurnberg, Paris, St. Albans, Luxembourg, Poland, and Vienna. In addition to performances in International Bach Festivals in Paris and Marburg, Ms. Rhodes has given Bach recitals throughout the United States and has performed at numerous national and regional conventions of the American Guild of Organists. In July 2004 she was one of the first organists to perform on the new organ in the Walt Disney Concert Hall in Los Angeles. This occasion took place at the AGO National Convention when she appeared as soloist with members of the Los Angeles Philharmonic. Continuing with the organ inauguration she performed the monumental Symphonie Concertante by Joseph Jongen on the Los Angeles Philharmonic Subscription Series.

The 2011 season includes concerts solo recitals in the concert halls of Berlin and Dortmund, Germany. 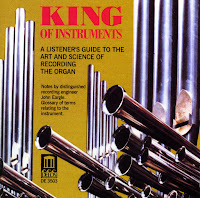 To purchase King of Instruments: 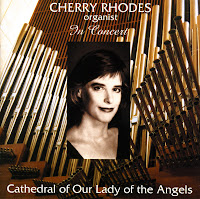 To Purchase Cherry Rhodes in Concert: 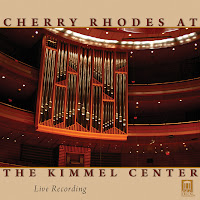 To Purchase Cherry Rhodes at The Kimmel Center: