This coming Tuesday (7/26) Delos will release Mendelssohn: Complete Music for Cello and Piano in CD format (Digital Downloads already available). The album features the well-known and critically acclaimed duo of Emanuel Gruber and Arnon Erez. In preparation for this release, we want to acquaint you with these stellar performers. We’ve already told you about Emanuel Gruber, so today we’d like to introduce you to world-renowned pianist Arnon Erez.

Highly acclaimed for his sensitivity and virtuosity, as well as his successful collaboration with world famous musicians Arnon Erez has gained a reputation as an outstanding pianist.

Mr. Erez plays in one of the world’s leading duos with violinist Hagai Shaham, which has attracted much praise from critics:

“A superb partnership…the sheer verve of the playing is irresistible.“ Gramophone

The Duo’s fruitful collaboration has crowned them with the first prize at the Munich International Duo Competition in 1990, which led to numerous concerts and recordings.

Mr. Erez has appeared in major festivals around the world, and as a soloist he has performed with various orchestras including the Israel Philharmonic. In addition, he has given many recitals and recorded for radio and television stations in Germany, Austria, France, Holland, Israel, Turkey, Mexico and Brazil.

His discography, mainly on the Hyperion label, won much praise and a BBC Music Magazine Choice. His recordings include Grieg sonatas; Bloch, sonatas and suites; Beethoven, complete cello and piano sonatas; Brahms-Joachim Hungarian dances; and works by Hubay, Weiner, Achron, and more.

Arnon Erez graduated from Tel Aviv University, as well as advanced studies of chamber music with the Guarneri Quartet in the U.S.A. Currently, he heads the Chamber Music Department at the Buchmann-Mehta School of Music, Tel Aviv University. 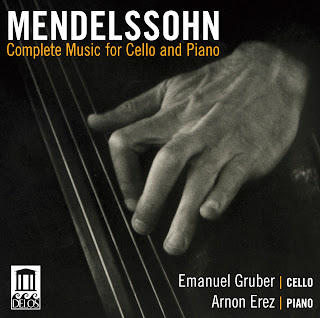 Emanuel Gruber and Arnon Erez inspired a rave from Gramophone for their recording of Beethoven works for cello and piano (Eroica, 2006). “Like-minded musicians give us a Beethoven set that shines” was the headline.

Now the acclaimed Duo offers a captivating new Mendelssohn set that shines and sings and reminds us that there is fresh joy and beauty to be found in this music.