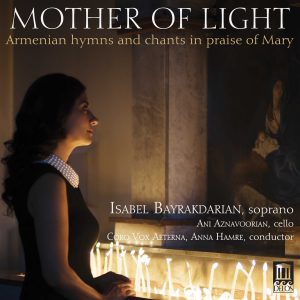 Bayrakdarian’s inspiration for bringing sacred Armenian songs to life came two years ago, in her words, when she “made a desperate plea with God to spare [her] mother’s life, and in return, [she] would sing praises for His mother Mary.” This concert of 18 Armenian hymns and chants includes “Khngi Dzarin,” “Antaram Dzaghig,” “Oor Es Mayrim,” and “Asdvadzadin Yergnayin,” which date from the 5th century on. This concert is the fulfillment of this promise and will prove to be a unique and spiritual event for music lovers.

Bayrakdarian is the winner of four consecutive Juno Awards for the Best Classical Album (vocal category) and is the featured soloist on multiple Grammy award winning albums. Joining Bayrakdarian will be Coro Vox Aeterna, a highly-trained choir based in the Central Valley conducted by Anna Hamre, Artistic Director of the Fresno Community Choruses. Dr. Hamre has led ensembles across the globe, and is highly regarded, having received numerous awards, for her conducting and teaching. On the cello will be Ani Aznavoorian, who has appeared as a soloist with many leading orchestras, including the Chicago Symphony Orchestra, the Tokyo Philharmonic, and the Julliard Orchestra.

This special event will be followed by a reception and the worldwide release of Bayrakdarian’s new CD, ‘Mother of Light’. Hymns of this recording were arranged by Serouj Kradjian who has stayed true to the medieval and mysterious essence of the music. The recording was made in Fresno and is produced by Delos Productions, Inc.