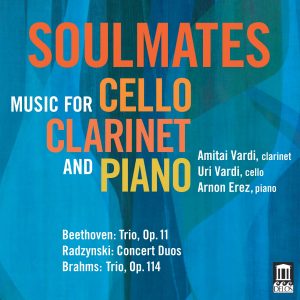 Jan Radzynski sets forth on a captivating journey in five movements, featuring a kaleidoscope of national styles. He began his association with Uri Vardi in Israel, where the Vardi family from Hungary and Radzynski’s from Poland first intersected. Meeting once again during graduate studies at the Yale School of Music, their friendship has been enriched by Jan’s work as an esteemed composer with multiple cultural relationships to Poland, Israel, the United States, and Jewish tradition—and by Uri’s commitment as celebrated teacher and performer with collaborations across musical boundaries. Jointly, they have found ways to embrace the complexities of their origins and diaspora. The duo’s dedication to Vardi’s entire family signals their deep connection.

In the hands of those less skilled than Radzynski, musical styles associated with national traditions can seem dull. But with Radzynski’s sure handed control, subtlety, and wit, each style expresses a spectrum of carefully modulated feeling. A signature Polish dance, “Polonaise,” comes first, providing an exuberant opening that is at once expansive and tender. Movement II, “Melody,” suggestively linked to the first movement with the continuation of a warm D-major harmony, evokes the familiar sounds of a dark night on the Hungarian plains à la Bartok.

Movement III, Spain’s evocative “Andalusia,” not only recalls the “otherness” of this world but also the feeling of hidden sensuality through the music’s seductive interplay. Here, as elsewhere, chromaticism convinces with its beautiful colors as the persuasive writing provides each player with a remarkable range of opportunities for expression. Movement IV, ”Valse,” unfurls as a celebration that recalls the glitter of high style in a Europe from long ago. The mixing of this innate joy with a sadness that reflects the catastrophes of twentieth-century Europe makes clear that national memory must always embody both. Movement V, “Victory March,” embraces a spirit of fun that is countered by a sense of irony as if to say, history has been unkind, but we survive and live to celebrate. Remarkably, Radzynski brings together the beautiful simplicity of traditional musical styles juxtaposed against the historical contradictions and ironies that give his music depth and texture.