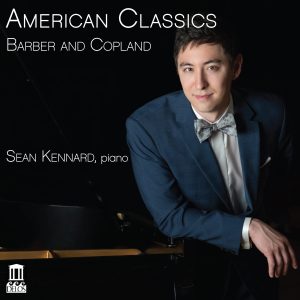 For his debut album on Delos, the brilliant emerging virtuoso Sean Kennard has chosen a captivating program featuring solo piano music by two of America’s most iconic composers: Samuel Barber and Aaron Copland. While neither composer’s body of work includes a great many pieces for solo piano, each has left a legacy of superb piano compositions to memorable effect.

Of the five works on this album, Barber’s finger-twisting Sonata for Piano (premiered by legendary virtuoso Vladimir Horowitz) and Copland’s stunning Piano Variations stand as enduring masterpieces of 20th-century American piano music. Both pieces incorporate broad spectrums of modernist musical language and styles, as well as degrees of difficulty that only the finest and most technically accomplished artists — like Sean Kennard — can master. And most of the shorter pieces offer delightfully evocative treatments of musical Americana.