Piet Koornhof is Drawn To Works off the Beaten Path 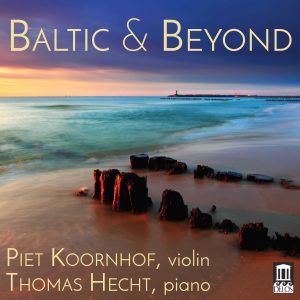 Even though I dearly love the “standard” violin repertoire, I’ve always been drawn to music that is off the beaten path. The attraction is twofold: the impulse to share the freshness of new discovery; and the sobering realization that the standard repertoire has been so magnificently served by so many masterful performers that for me to add another performance would be, well, to add just another performance.

I am reminded of a famous pianist who once confessed that when he heard another legendary pianist’s performance of a particular piece he thought could not be surpassed, he decided not to attempt it himself in public. I certainly feel that way about many of the well-known masterworks in the violin repertoire. Consequently, I often search for captivating music that is less well-worn and that can offer a little freshness to audiences. We trust the music on this disc fits that bill.

When I first heard pianist Thomas Hecht – my collaborator in this recording – play many years ago on a trip to New Zealand, I was instantly bowled over by the beauty of his sound and the soulfulness of his playing. Even then, I entertained the fantasy of someday performing together. To my delight and my family’s, a warm friendship ensued, allow- ing for the distinct privilege of bathing often in his beautiful sound and soulful playing, both as a listener and as an ensemble partner.

That focus of attention on quality of sound and matters of the soul is another reason for the choice of repertoire on this CD. Many of these works contain a stillness and closeness to the heart that allow the particular tonal beauties of the violin and the piano – singly as well as in ensemble – to come to the fore. Stravinsky reportedly thought that the combination of violin and piano was not a happy one, but we hope these works prove otherwise. All of these pieces speak from and of the soul, and are in some sense intended to allay human suffering and estrangement through beauty.

The music of Baltic composers Arvo Pärt, Peteris Vasks, and Balys Dvarionas, as well as that of Georgian composer Giya Kancheli, carries strong meditative and spiritual overtones, and all four composers share a fundamental conviction that music has the power to transcend suffering and heal the human spirit.

To better understand the renewed spiritual nature and the healing power of their music, it’s helpful to recall that the many liberated nations that emerged after the Soviet Union’s collapse in 1991 experienced a collective “artistic Renaissance” once they had escaped the Communist-inspired cultural strictures. This new-found artistic freedom produced fresh outpourings in all of the arts, but particularly in music. These composers – all having suffered under the severely repressive Soviet regime and its aftermath – are, for the most part, an integral part of this new Renaissance.