“Tower Music” … The Eiffel Tower as a Classical Instrument?!? 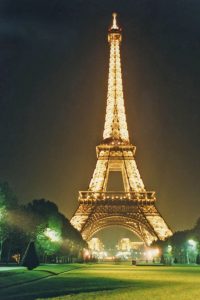 “You’ve gotta be kidding,” was the incredulous response of a musical friend of mine after I had told him that composer Joseph Bertolozzi – one of Delos’ most unique recording artists – was actively planning to make music using the Eiffel Tower as an actual musical instrument! It’s a good thing we were sitting in my living room, where I was able to back up my seemingly outlandish claim by spinning for him one of Delos’ most unusual CDs: Bertolozzi’s Bridge Music (DE 1045). While using the Eiffel Tower in Paris was his original concept, he made this recording to prove to the world (including skeptical French officials) that large public structures could indeed be used to make real music. Those of you who have faithfully followed the Delos Insider blog are probably familiar with it.

To make this unique recording, Joseph used New York’s mid-Hudson suspension bridge as a huge, one-of-a-kind instrument, with the resulting music to be played from scores on laptop screens by a team of trained percussionists stationed individually at various locations on the bridge. However, lacking the financial support to hire enough percussionists and secure the necessary equipment, Joseph ended up completing the project pretty much single-handedly. Exploring every accessible surface of the bridge’s structure, he used an assortment of drumsticks, mallets, hammers and clubs (even a small log covered with lambswool at one end) to produce a staggering array of both tonal and non-tonal sounds, which he then recorded digitally and stored in his computer. Combing through them, he then selected various tones and effects and created original compositions with them … genuine diatonic music that pleases, impresses and amazes most listeners!

Thus armed with positive proof of his concept, Joseph has gotten the green light from the responsible French officials to reveal to the world – for the first time in this fabled Paris landmark’s long history – the “voice” of the Eiffel Tower (part of the process was convincing the Parisian authorities that “beating” on the tower would not damage it in any way). With this “Tower Music” project still in the planning (and fundraising) stages, much remains uncertain – other than a planned Delos recording, and a series of live concerts to help celebrate the tower’s 125th anniversary in 2014.

However, with approval in hand and serious planning underway, the word is getting around – especially in Europe. The international press has picked up on the project, and articles/newscasts/interviews about it now abound – from America, England, Italy, Spain, Russia, the Netherlands, Lithuania, and even Kazakstan (among others). Links to these articles (if you speak the languages), and much more – including an international array of articles on Bridge Music – can be found at the composer’s Website. Also, check out the podcast interview that I conducted with Joseph a few months back – it contains some interesting “how I did it” technical details, as well as the incredibly sweet story (AAaaawww –sniffle!) about the main inspirational factor behind it all.

For our part here at Delos, we are supporting this fascinating project by making the Bridge Music album available at very special low prices to all European distributors from our warehouse/distribution center in Germany. On top of that, you can order the CD from the Delos Store at the grab-it-and-run low price of $7.99 – OR you can get the MP3 download from iTunes for only $5.99 (from Jan. 18-31).

While on the subject of filthy lucre, please remember that it takes MONEY to pull projects like this off. Not only must our stalwart artist come up with the cash to cover airfare and living expenses in Paris – but he must also raise the wherewithal to buy the necessary equipment and hire the small army of percussionists needed to pull off the planned live concerts. Thus, if you (or anybody you know) would care to help support one of the most original musical projects ever conceived, Joseph would LOVE to hear from you (www.JosephBertolozzi.com)!