Last week we told you about Delos artist Andrew von Oeyen’s quick tour through the U.S., and he is already bringing in high praise from reviewers. Enjoy some wonderful quotes from Omaha.com‘s review of his performances over the weekend with the Omaha Symphony, and read the full review on Omaha.com.

“One might even say that von Oeyen barely broke a sweat as he and the Omaha Symphony presented Brahms’ Piano Concerto No. 2 of 1881. But that hardly indicates a lack of emotion or engagement. It instead indicates that the American virtuoso, still only 31, brings a seemingly effortless command of the piano and its capabilities to the concert stage…

“…von Oeyen visually illustrated an authoritative quality sought by many a keyboardist. Whether storming through series of chords, gliding through arpeggios or coaxing sweetness out of quiet passages, his fingers barely seem to leave the keys. The slow third movement of the Brahms concerto especially epitomizes the title of the symphony’s weekend program: “Piano Romance.” With a deft, feathery touch, von Oeyen realized his instrument’s full potential to enthrall its listeners.”

Enjoy the full review on Omaha.com 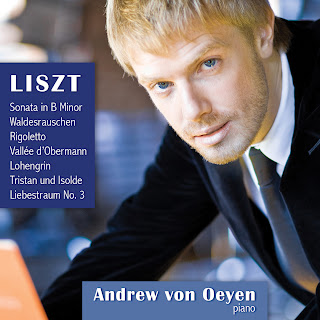 “ANDREW VON OEYEN, KEENLY ATTUNED TO LISZT’S GRAND DESIGN…I would go so far as to say that von Oeyen played the finest all-around performance of Franz Liszt’s Sonata in B Minor that I have heard in many years.” – Washington Post