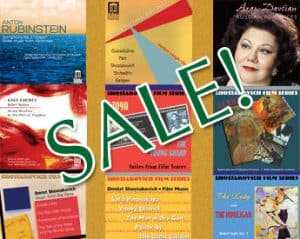 Russian Disc was one of the few Russian CD labels to continue producing quality recordings after the downfall of the Soviet Union, until legal difficulties forced its shutdown. But Delos retained exclusive rights to re-release their excellent recordings in our ongoing DRD series, featuring often seldom-heard Russian classical gems in idiomatically true and widely acclaimed performances by many of the nation’s top artists. And now, through August 1st, the online Delos Store is offering all of our nine DRD releases (thus far) for the special low price of $9.99 per disc, and on iTunes for $7.99!

Here’s your chance to add these classic recordings to your collection at a deep discount – but don’t delay: sale ends on August 1st!

Find All of these Titles On Sale on The Delos Store!