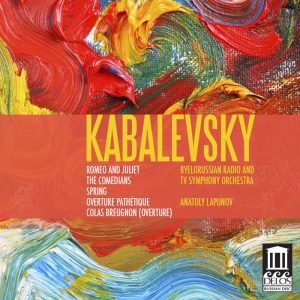 The Soviet musical establishment considered Dmitry Kabalevsky a “dream composer,” as his works were bright, straightforward, and often folk-based. His undisputed gifts as a melodist and orchestrator – as well as his musical sincerity – made him one of the most popular of the soviet-era composers.

This appealing Russian Disc re-release offers some of his finest and best-known works, including the symphonic suites Romeo and Juliet and The Comedians, his tone poem The Spring, and the Pathétique and Colas Breugnon overtures. Anatoly Lapunov leads the Byelorussian Radio and Television Orchestra in sturdy, spirited and idiomatically true performances.