Composer John Knowles Paine (1839 – 1906)—also an acclaimed organist, choirmaster, pianist and pedagogue—is primarily known as the first American to earn recognition for his larger-scale symphonic and choral-orchestral works: music that has attracted renewed interest in recent decades. Of lesser renown are his choral, chamber and keyboard compositions. Recordings devoted to his beautifully crafted piano music have been few and far between. With this album, Christopher Atzinger seeks to redress such unjustified neglect.

Paine has been called the “father of the Boston Six,” being the senior member of the famous group of accomplished composers active in and around the Boston area—then (alongside New York) the American center of classical music—during the second half of the nineteenth century and on into the early 1900s. Its other five members are Amy Beach, Edward MacDowell, Arthur Foote, George Chadwick and Horatio Parker. Among them, they created the first body of American concert music, thereby wielding significant influence upon the generations of American composers that followed. Of them all, Paine was surely the most important in the development of American classical music, with several significant “firsts” to his credit: He was the first American to be formally trained to the highest European standards, the first to gain widespread recognition as a composer, the first to write a symphony, the first American composer-in-residence, the first American-born professor of music and the first guest conductor of the Boston Symphony. His academic legacy is of singular importance: He created the nation’s first classically grounded music department and curriculum at Harvard, where he taught from 1873 until his death. And that pioneering model soon spread to colleges and universities across the country, becoming the foundation for most conservatories as well as college and university music departments.

Paine was born in Portland, Maine, to a well-known musical family. His musical gifts were recognized at an early age by his father, Jacob Paine, who was the proprietor of the local music store and offered lessons in the various instruments sold there. It is not known precisely when the boy began formal training, but he was ten years old when Hermann Kotzschmar—a young German immigrant well-trained in the rich classical traditions of his native land—settled in Portland and won immediate respect as a musician and teacher. He and the elder Paine quickly became friends. Kotzschmar immediately picked up on young John’s musical gifts and soon took on the lad’s formal training: mostly piano- and organ-based and built upon a thorough grounding in music theory, harmony and counterpoint. 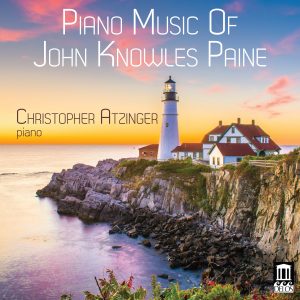 By 1858, it had become apparent to Kotzschmar that the young man’s skills warranted refinement in Germany, whereupon Paine embarked for Europe and began studies in Berlin with several of the city’s finest teachers. Before long, all of them—as well as prominent critics and arts patrons—were highly impressed by his talents as well as the zeal and effort that he put into his studies. Being primarily an organ student in Germany, he was of course steeped in the music of Bach alongside advanced studies in harmony, counterpoint and composition. His immersion in Berlin’s rich musical culture also exposed him to large-scale symphonic and choral-orchestral music, as well as more intimate chamber, vocal and piano compositions.

In the process, he absorbed the styles and sounds of Schubert, Beethoven, Mendelssohn, Schumann, Brahms, Chopin and (eventually) Wagner—and some of his piano works bear common European titles (nocturne, impromptu, etc.). His comprehensive training and exposure sealed Paine’s destiny to become America’s first significant composer. Soon after his return to the United States in 1861, Paine moved to Boston, where he was immediately welcomed by the city’s classical establishment.

While Paine’s initial renown in Boston was as a virtuoso organist, he never lost his flair for piano playing—both as a solo performer and chamber musician. His public appearances as a pianist grew ever fewer as his academic career progressed, but he continued to compose for piano intermittently throughout his life and performed privately for his friends and colleagues, or to celebrate special occasions. It is likely that he took advantage of Boston’s then-thriving in-home salon tradition, where smaller-scale “Hausmusik” compositions were performed for family, friends and colleagues. While few, if any, of his piano works were conceived on a grand scale, some of them employ devices found in his symphonic creations.