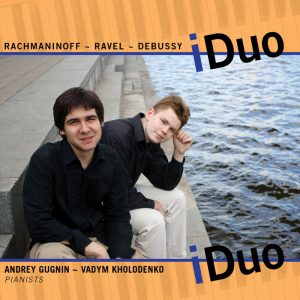 Among the thirty pianists from thirteen countries now gathered in Fort Worth, TX for the 2013 Van Cliburn International Piano Competition is Ukrainian virtuoso Vadym Kholodenko: a rising star and Delos recording artist who – at age 26 – has already won top prizes in several other prestigious piano contests worldwide. This year marks not only the competition’s fourteenth staging (it is held every four years), but the first since its legendary namesake passed away last February.

Kholodenko and his accomplished young piano colleague Andrey Gugnin joined forces a few years back to form a crack duo-piano team known simply as iDuo – which is also the title of their stunning 2010 debut CD for Delos featuring the music of Debussy, Rachmaninoff and Ravel. Maestro Constantine Orbelian, Delos’ most prolific recording artist, showcased him (along with a bevy of other emerging young virtuoso instrumentalists and singers from former Soviet-era nations) last December at a sold-out gala Carnegie Hall event with the Moscow Chamber Orchestra entitled “New Stars for a New Century” – and Vadym’s performance drew especially tumultuous applause from the jam-packed audience.

While the contestants are all in town now for preliminary drawings and other festivities, the actual competition begins Friday, May 24 – and will draw to its close when prizes are awarded on June 9. So please join the Delos team in wishing Vadym the best of luck as he goes up against some of the world’s finest piano talent. And, while you’re at it, sample his supreme piano chops in his iDuo album below: