Were you watching The Oscars last night? While it didn’t win, we were certainly rooting for Bridge of Spies which was nominated for six awards, including Best Picture (it won Actor in a Supporting Role). Why? Because the soundtrack includes Shostakovich’s Piano Concerto No. 2 in F Major, Op. 102 recorded by Andrey Gugnin, Constantine Orbelian and the Moscow Chamber Orchestra! 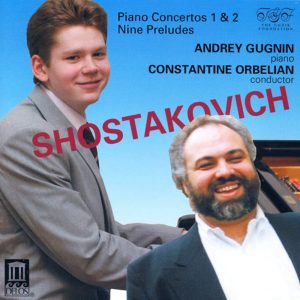 This debut release from Delos highlights the amazingly mature artistry of a young (barely out of his teens) Andrey Gugnin. With a performance schedule already including Russia’s most prestigious concert halls and many international venues, Gugnin seems well on the way to a distinguished career. The unique partnership between Maestro Orbelian, the MCO and Andrey Gugnin make this recording a technical and commercial must-have for the casual and committed classical consumer alike.