Renée Fleming and Dmitri Hvorostovsky Perform in the City of Palaces on THIRTEEN’s Great Performances, September 1 at 8 p.m. on PBS 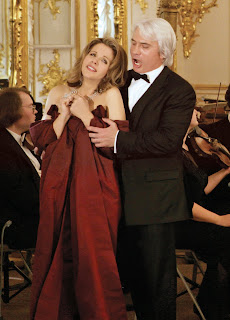 Great Performances is a production of THIRTEEN in association with WNET.ORG – one of America’s most prolific and respected public media providers. Recorded in high definition television and directed by Brian Large, the film—a thrilling blend of history, art and music—was conceived and produced by American conductor Constantine Orbelian, founder of the “Palaces of St. Petersburg” festival, and the only American in history to become Music Director of a Russian orchestra. 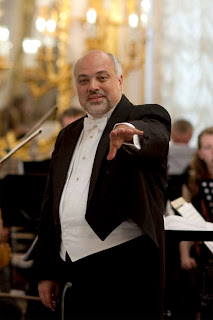 Viewers are treated to exclusive access to the Hermitage, Catherine the Great’s theater at the Winter Palace, the spectacular golden fountains and Golden Ballroom of the lavish Peterhof Palace, and the White Column Ball Room of the splendid Yusupov Palace. Orbelian and the State Hermitage Orchestra accompany Fleming and Hvorostovsky in stirring performances of selections from Verdi’s “Simon Boccanegra” and “Il Trovatore,” as well as Tchaikovsky’s “Eugene Onegin,” “Queen of Spades” and “The Oprichnik,” with additional selections by Rachmaninov and Medtner accompanied by pianists Olga Kern (Fleming) and Ivari Ilja (Hvorostovsky). Between performances, viewers accompany the two acclaimed singers for romantic boat trips through St. Petersburg’s extensive canal system, revealing the city’s many scenic wonders.

Great Performances is funded by the Irene Diamond Fund, the National Endowment for the Arts, Vivian Milstein, the Corporation for Public Broadcasting, public television viewers, and PBS. Major support for the telecast is also provided by The Anna-Maria and Stephen Kellen Arts Fund. For Great Performances, John Walker is producer and Bill O’Donnell is series producer; David Horn is executive producer.

Visit Great Performances Online at www.pbs.org/gperf for additional information about this and other programs.