Oleg Timofeyev and the Russian Guitar Quartet a Best of 2016!

Iowa Public Radio highlights guitarist Oleg Timofeyev in their Best of 2016 nominees, including his recording with the Russian Guitar Quartet, A Tribute to the Mighty Handful! 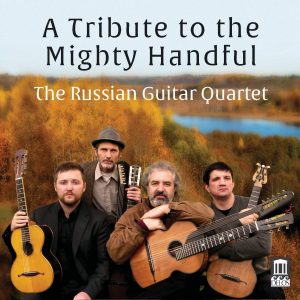 Many guitar fans aren’t aware of Russia’s once-popular seven-string guitar tradition, especially the use of different sizes and types of the instrument in quartet configurations. Such ensembles were quite active in Russia until the early 20th century, but no scores or manuscripts for them have survived.

Enter renowned guitarist and lutenist Oleg Timofeyev, who formed the Russian Guitar Quartet in 2006 for the specific purpose of resurrecting this multi-faceted tradition in the 21st century. And what better way to demonstrate the unique sound and style of such an ensemble than to arrange for it the music of “Mighty Handful” – the influential 19th-century alliance of five composers who collectively sought to establish a unique, folk-based brand of Russian national music.