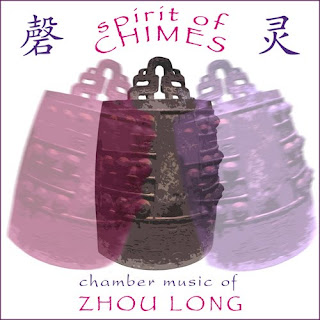 Zhou Long’s latest Delos album is as beautiful and exotic as its title suggests. As in his previous Delos recordings, such as The Flowing Stream (DE 3233) and Tales from the Cave (DE 3335) his unique creations bring together the aesthetic concepts and musical elements of East and West.

The title piece, “Spirit of Chimes,” was inspired by the sounds of the earliest surviving musical instruments from ancient China — bells, chime stones, and Jiahu bone flutes (ca. 7000 BC) – which are also the world’s oldest extant playable instruments.

The other works on the program have similarly fascinating associations. In “Secluded Orchid,” the seemingly free-floating music — “delicate, refined, and
unhurried” — was inspired by a piece for the qin, a Chinese string instrument. “Wu Kui,” a folk dance from northeast China, expresses the dancers’ joy in work and life. “Taiping Drum” takes its inspiration from a popular form of song and dance among the Han people,

The three brilliant artists who have joined together in interpreting this music are stellar names in today’s musical scene. Cho-Liang Lin, whose career has spanned the globe for 25 years, has appeared as soloist with every major orchestra, and made his musical presence felt in a variety of musical genres. Hai-Ye Ni is principal cellist with the Philadelphia Orchestra, and has already won many honors as a soloist. At age 26, pianist Helen Huang, who began her impressive international career as a teenager, is a seasoned virtuoso.

Zhou Long has dedicated this recording to the memory of Delos founder Amelia Haygood.