It’s Saint Patrick’s Day and we have just the album for it! 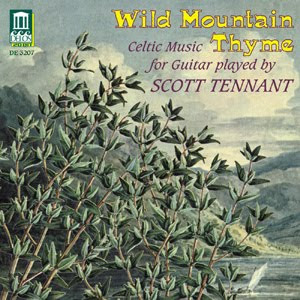 “Getting in touch with his roots, Scott Tennant seems quite comfortable with this music and is able to sit back and let the jigs and airs play themselves out… simply enchanting.” American Record Guide

Scott Tennant, one of America’s leading guitarists, is a founding member of the Los Angeles Guitar Quartet, with whom he has made a number of acclaimed recordings on Delos. Wild Mountain Thyme is his debut solo recording for the label, and features music personally selected by Scott. Every piece has its roots in the Celtic tradition, either as a Scottish, Irish or English tune or a new composition “celtically” inspired.

Scott writes in the notes that the album is a celebration of Celtic music remembered from his youth. “Over the years I’ve always fallen back on those Scottish, Irish, and English tunes I recall from boyhood for both solace and merriment.”

Scott is the author of the well-known book on guitar technique, “Pumping Nylon.”