The previous night was a late one, so I figured Terry would want to sleep in a bit and get a late start rehearsing, and with such a late dinner I thought I’d just skip breakfast and sleep as well. So I headed over to the rehearsal studio around 11:00 to find Terry had been there for well over an hour already practicing some solo pieces. It’s not really possible to be late with Terry. He’s practices and works a lot, but he’s also organic about his work schedule and works when he feels he can do the best work, and he doesn’t expect anyone to rehearse if they’re tired or for whatever reason would rather not or can’t. He was happy to see me when I arrived. He hadn’t slept much at all again, but seemed fine and we rehearsed for a couple of hours. 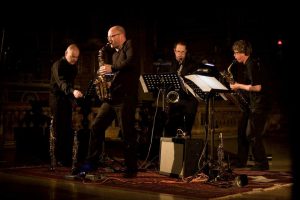 The concert that evening was the Arte Quartet, an astoundingly good new music saxophone quartet from Switzerland. We had gotten to know them a bit the night before at Terry’s organ concert which we all attended, and their concert was equally mind blowing. It consisted of one 6 movement piece by Terry called Chanting the Light of Foresight, which is about an hour long. It was at a smaller church and the acoustics were phenomenal, quite live but not muddying. The first movement starts with sustained tones and the group started the piece offstage and entered from different corners of the church, and with the wonderful resonance of the room, you couldn’t tell exactly where the music was coming from, it just seemed to be hanging in the air somewhere above us, moving from one space to another. The quartet gradually coalesced on the stage. At first the harmonies are very simple and the listener is drawn into the consonance of the octaves, fourths and fifths, played perfectly in tune, then 3rds, 2nd and 7ths start to enter the harmonic picture and after thoroughly exploring the resonances with imaginative 4 note chords, microtonality is introduced and the resonances become more complex. One of the guys told me after that the acoustics of the church really affected the performance for them positively and that while it’s usually quite difficult to sustain the exact microtonal intervals, it felt to him that the chords they produced seemed to lock in and almost play themselves and create their own sort of energy. I think everyone in the room felt that wonderful energy of inertia rolling the musicians forward with their own momentum. 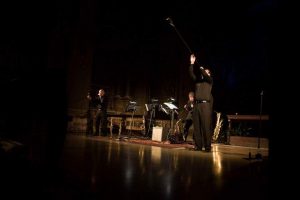 The piece was actually originally 5 movements and is based on a celtic legend. Part of the legend is a battle scene which Terry didn’t include so the original group that recorded it asked Terry if they could compose their own battle scene movement in the middle of the piece. Terry, being Terry, welcomed the idea and the Arte had decided to compose their own 3rd movement as well. Not only did they compose it but they invented and built a set of instruments to play it on. These instruments consisted of long semi-flexible tubes with bell shaped piece at the ends and also similar shorter curved instruments as well. I wish I had gotten some video of them playing them because the sound was unique, maybe a cross between a didgeridoo, a trombone and a sax, and they swung the longer ones around while playing them and were able to send the sound flying all around the space. As the music built in intensity, one of the players used a guitar amp and pedals, including digital distortion, creating an incredibly wide palette of sound which was a wonderful contrast to the rest of the piece. It was a real tour de force and a rare musical experience for the audience who showed their appreciation with extended shouts of “bravi!!” at the end. 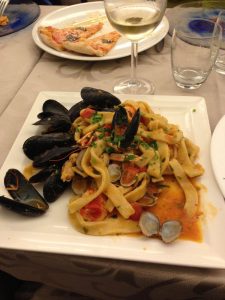 Much beer and food and laughs and exchanges of cd’s and emails after at a neopolitan restaurant.