Breakfast as usual at 8. We all hoped Terry had finally gotten some sleep so it was very reassuring to see a big smile and a thumbs up when he came in. 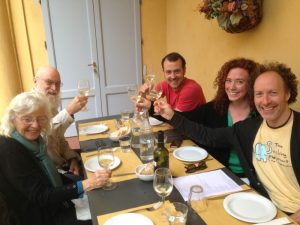 Off to our padded cell to rehearse and then lunch at another of Massimo’s favorite haunts, a wonderful little seafood restaurant. The menu of the day included only a few items that they were serving that day, and one of them was crudite of a kind of large prawns. I’m a big fan of ceviche, which is not really raw because it’s marinated in lemon or lime, so Gyan and I thought we’d split it. What was served was a platter with 3 very large whole prawns, complete with heads and sizable claws. They were about the size of very small lobsters and were indeed totally raw, as were the shelled baby shrimp that accompanied them. But it was too late to turn back now and we figured we had a couple of days before our concert in case we got incredibly sick, so we dug in. The flavor was very delicate and I expected them to be a bit stringy and tough, but they were almost creamy. New culinary territory for me.

On the way back to the hotel we passed the tower, a medieval landmark of the city and, maybe it was the wine, but we decided to climb the stairs to the top, about a 10 minute workout. There are famously 2 towers right next to each other. The first started leaning over rather precariously in mid construction and was never finished, but also never taken down. No climbing that one.

Terry’s organ concert in the evening in the gorgeous Basilica di Santa Maria was packed with Terry fans young and old who gave him a long and appreciative standing ovation. Concerts in Italy start late, this one was supposed to start at 9:30, and dinners often start even later. Afterward about 20 of us went out to yet another amazing restaurant, including the members of the Arte quartet whose festival concert would be the next night. After dinner, somewhere around 1:30 am, several different bottles of grappa appeared on the table and were compared and recompared, in the service of thorough research, and later still we were back at the hotel, luckily just around the corner.