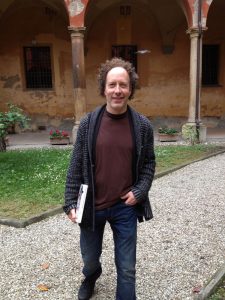 Breakfast at 8 as yesterday but we came down to find Terry looking pretty grim. He hadn’t slept a wink and was weak and miserable. Unfortunately this has been a pattern with him in the last several years when traveling to Europe. The jetlag really affects him badly. When we were in France together in the fall it was the same. He relies on his Ambien and took 2, but still no sleep. But we went to our rehearsal studio and he perked right up and we had a very productive rehearsal for over 3 hours nevertheless. Afterwards we had planned to go to this very wonderful restaurant that Massimo recommended but Terry went back to the hotel to try and sleep before his afternoon rehearsal with the pipe organ at the church. 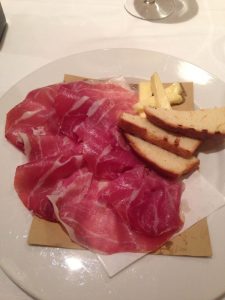 It was a shame that he missed that meal because it was extraordinary. Massimo and Jean-Claude Eloy joined us. Jean-Claude is a composer from France, about Terry’s age, a delightful and warm man with an engaging smile, who had performed on the Saturday night concert. Massimo, who knew the chef and everyone at the restaurant well, recommended the prosciutto as an antipasto, which is a local specialty and was of the highest quality. It absolutely melted in the mouth. 2 of the other local specialties are tortellini in broth and tagliatelle bolonese, also called tagliatelle ragu, which is a pasta a little wider than fettucine, and a good ragu is quite dry compared to what most Americans would expect. All the pasta was handmade and fresh, of course, and perfectly cooked. Tortellini are made with the pinky, and served in a very simple clear chicken broth. Some very wonderful bottles of wine chosen by Massimo, one a local unfiltered white wine which was something between a Belgian beer and kambucha. Very unusual and not for everyone, but wonderful to try. And then some very good, dry grappa afterwards. We didn’t even want to tell Terry about it all. 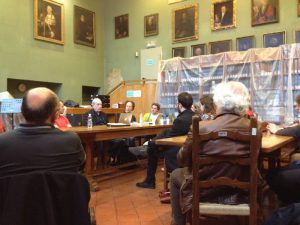 At the conservatory – Gyan Riley on the left in orange, and (from left to right) moderator Franco Fabbri, Tracy Silverman, and Massimo

He was supposed to go to the church and rehearse on the pipe organ but instead wanted to find a doctor, so Massimo found a naturopath and they spent most of the afternoon there and running around Bologna in Massimo’s car, gathering the various medicines she prescribed. By 5:00 Terry was really weak and exhausted and decided that he just couldn’t go to the talk at the music conservatory at the university that was planned for him at 6. I volunteered myself and Gyan to pinch hit for him, so off we went to the university, which is really a whole district of the old city. With something well over 100,000 students, it’s also the oldest university in Europe. The talk was moderated and translated by the very erudite Franco Fabbri, who is also a composer and professor at another university and a well known music journalist and was also an important guitar player in some seminal 60’s experimental rock bands. And a wonderful guy. We played excerpts of Terry’s music off my laptop and answered questions about his music, the concerto he wrote for me, and were able to say lots of wonderful things about him in his absence that he would never had said himself, of course.

We returned to the hotel to find Terry still hadn’t slept but was in good spirits nonetheless and accompanied us to a late dinner at the restaurant next door. We all hoped the combination of wine and limoncello served after the meal and the various herbs and roots and powders the doctor prescribed would send him off to a deep slumber.