Power Players is “Something Special” 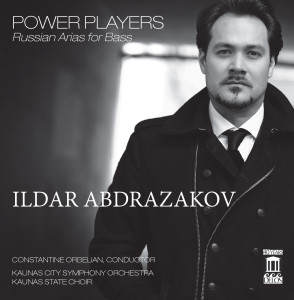 “Now on the Delos label comes ‘Power Players’ — the first full solo aria release from Russian bass Ildar Abdrazakov who has established himself on the world stage. … Notwithstanding, bass roles include some interesting roles as demonstrated here and reflecting many of the greatest achievements in the Russian bass voice repertoire. In my report of Abdrazakov’s 2013 performance of the Verdi Requiem at the Kreuzkirche, Dresden I wrote of his ‘innate sense of authority … deep resonant tones … rich, dark character and projected powerfully and vividly ….’ I wouldn’t change a word except to say that on the evidence of this release Abdrazakov seems to have developed even greater vocal control. … My particular highlight is the Demon’s aria Na Vozdushnom Okeane from Anton Rubinstein’s underrated The Demon. As the forlorn and mysterious Demon wandering the heavens searching for the warmth of human love Abdrazakov’s aptitude for characterisation is fiercely evident. Worthy of esteem is his exquisite legato and capacity for vocal colouring. … An experienced opera conductor, Constantine Orbelian ensures tautly controlled and well paced tempi from the Kaunas City Symphony Orchestra capably supported by the splendid Kaunas State Choir. … This collection is something special. It has hardly left my CD player.” —Michael Coookson, MusicWeb International

Read the full review at www.musicweb-international.com