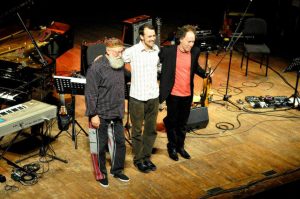 Today we traveled about an hour to the little town of Lugo. Surrounded by farmland and vineyards, this peaceful little town is home of the Teatro Rossini, one of those perfect little opera houses you find sprinkled throughout Italy. I remember being enchanted by the first one I encountered in Perugia when I played there years ago at the Umbria Jazz Festival with the Turtle Island String Quartet and this one was almost identical. Seating about 400, it has a steeply raked stage and 4 levels of boxes in a clean semi-circle around a small floor of seats. The stage is actually deeper than the length of the house and the rake is so steep that an inch and a half wooden shim is needed under one side of the piano bench to level it. I can’t imagine how dancers work on these stages, but they do.

We checked into the Hotel San Francisco, a small place in a sleek, modernist Italian style, and walked across the street to the theater and set up for soundcheck, followed by yet another incredible meal at a little place across the street.

The music we play in the trio is not really written. These are pieces that Terry’s been doing for years and has never written down more than a few melodic fragments and rhythmic motifs. Sometimes he has new ideas for them and organizes new lines or sections and sometimes he decides to leave out sections. Many of them have some sort of faster moving repetitive line, usually in some odd meter or combination of odd meters. There are usually specific melodies which go with those lines and often rhythmic patterns which go with various sections. And then in performance, Terry will usually take these elements and rearrange them spontaneously, sometimes taking them in different tempos, sometimes leaving out things and often inventing whole new sections or variations of existing sections.

So the rehearsals are for reviewing what those elements are and organizing a basic roadmap for how we’ll approach the tune this time, usually different from the last time we’ve played them, just because he feels differently about the material then he did a few months earlier. For instance, he might say, and this could occur just before walking onstage, “Let’s start this tune with a raga.” Onstage, it’s pretty much anything goes. And because there’s so much freedom, I often check in with him to make sure he’s OK with what I’m doing. For instance, before the show I said to him, “Terry, sometimes I’m not sure if it’s time to bring in a melody or rhythmic motif yet in a tune and I never know if you like what I did because you always smile and seem to be happy with it.” And he said, “When we go onstage, we are 3 equals. Anything you do is as valid as anything I do, so if you feel it, play it. I guess I smile because I know you’re feeling like doing that in that moment. And I figure that’s probably better than what I’m doing, anyway!” I can’t imagine of a more creative and free way to work, or a more open-minded, appreciative and nonjudgmental person to work with.