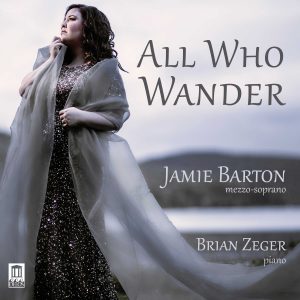 “I first became aware of Jamie Barton in 2007, when she was one of an exceptional trio of women (with Amber Wagner and Angela Meade) who won the Met Opera auditions. Since then she has progessed from a promising young mezzo (in roles like Suzuki) into an international star with a repertoire that includes Adalgisa, Azucena, Jezibaba, and Fricka. She seems now to be the equal of any dramatic mezzo before the public. The great element which has enabled her rise to stardom is, of course, her voice—large, rich, fully controlled. She is one of the few singers who can delight an audience simply by the sheer beauty of her voice. Nowhere is this beauty more evident than here. … She and her pianist Brian Zeger communicate exactly the proper mood of each song, whether boisterous and fun-loving or quiet and reflective. … it is the opening section of Mahler songs that makes this recording stand alone. There are 8 songs—the 5 Rückert lieder followed by 3 other Mahler gems. I do not have words to describe the beauty of these songs— the music itself, the poetry, Mahler’s incredible sense of how to create a mood—especially one of sadness, longing, and thoughtfulness— and Ms Barton’s glorious sound reinforcing the emotions surely felt by any sensitive listener. These are some of the most beautiful recordings I have ever heard. The high point for me is ‘Um Mitternacht’, the great poem where the narrator confronts man’s smallness and seeks help from a higher power. The interpretation is stunning. … Anyone who loves the human voice should own this.”